Home / The Jerusalem Insights / WEEPING FOR JERUSALEM: A THEOL ... 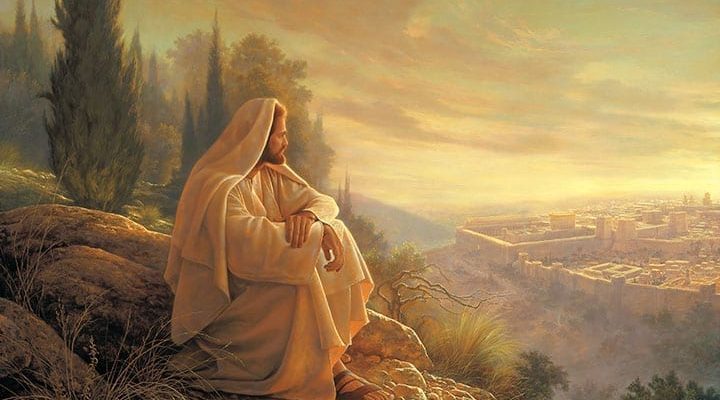 WEEPING FOR JERUSALEM: A THEOLOGICAL MEDITATION*

O Jerusalem, the holy city,
[God] will afflict you for the deeds
of your children,
but again he will show mercy
to the children of righteousness. (Tobit 13: 9)

For much of its long history, Jerusalem has been for believers much more than a geographic locale or the seat of Israel’s kings and conquerors. For the ancient Israelites, it was God’s abode among his people. For centuries of Jews, it was a longed-for object of tribal memory. For modern Jews, it has been the center of the realization of the Zionist dream. For centuries of Christians, it has been a pilgrim destination to the sites of Jesus’ passion, death and resurrection and home to Christians who trace their ancestry to the time of Jesus. For Muslims, it is al-Quds, “The Noble Sacred Place,” with Mecca and Medina one of its three holy cities, and the site of the Prophet Mohammed’s night journey to heaven. Through the three monotheistic faiths, Pope Saint John Paul II reminded us, Jerusalem is the locale of God’s encounter with humanity.1

Michel Sabbah, the Patriarch Emeritus of Jerusalem, has reflected on the mystery of the Palestinian Christian vocation.2 Their calling, he contended, must be worked out amid three realities. On one side, “the holiness of the land,” on another “the difficult birth of peace and justice” and on a third the “violation of the dignity of the human person, which is being perpetrated here.”3 Jerusalem is a microcosm of this struggle of God’s people to live their faith in a hostile world; and it has been that way since biblical times. Jesus himself wept over Jerusalem’s failure to recognize the day of its deliverance. “Jerusalem, Jerusalem, you that kill the prophets and stone those who are sent to you! How often have I longed to gather your children, as a hen gathers her chicks under her wings, and you refused!” (Matthew 23:37-38).

The prophets repeatedly took the spiritual drama of Jerusalem as a place of blessing, of infidelity and of God’s mercy as a motif for interpreting salvation history. This pattern is summed up especially in the closing prayer of the Book of Tobit.4 The prayer identifies God as “our Father forever,” and like a father, “He will afflict us for our iniquities/and again he will show mercy…. he will turn to you/and he will not turn his face from you”5 There is a movement from infidelity to punishment (or abandonment) to repentance, and finally renewal. Lament doesn’t end in sorrow but in hope of renewed relationship between God and his people who flourish in his peace.

In the Gospels, especially the Gospel of Luke, Jerusalem is the stage for the ultimate confrontation between Jesus and his opponents. Luke depicts the latter part of Jesus’ ministry as a doom-laden pilgrimage to the city that “kills God’s messengers and stones the prophets.”6  Jesus “sets his face toward Jerusalem” understanding “a prophet (should not) perish away from Jerusalem.”7 And as he approached Jerusalem and saw the city,” Luke tells us, “he wept over it, saying ‘Would that even today you knew the things that make for peace! But they are hidden from your eyes.”8 Jerusalem is a site of a cosmic tragedy, where the people of the royal city are blind to God’s action in their own time, and his chosen one is a suffering hero who steels himself to his destined end.

On the ridge atop the Mount of Olives sits Dominus Flevit (The Lord Wept) a shrine commemorating Jesus’ approach to the city at the end of his pilgrimage. From the garden wall, today’s pilgrims can overlook the whole modern city with the walls of the Old City and the Golden Gate where Jews believe the Messiah will appear on the last day in the foreground. From within, the congregation looks across the altar through a picture window with a wrought-iron chalice and host superimposed on the same scene, a reminder that Christ’s sacrifice continues to be offered for the holy city.

The difficult part for Christians, especially those committed to Jewish-Christian dialogue as essential to Catholic identity in the post-Vatican II Church, is Jesus’ prediction of the fall of Jerusalem:

The days shall come upon you, when your enemies will cast up a bank about you and surround you, and hem you on every side, and dash you to the ground, you and your children within you, and they will not leave one stone upon another in you; because you did not know the hour of your visitation.9

The prophecy seems to be a retrojected judgment based on Titus’ siege and subjugation of the city in the year 70 A.D./ C.E.10 What should have been a blessing, the visitation of a prophet bearing a message of peace has instead become a prophetic judgment against the city because of its rejection of the prophet.11

The motif of lamentation and destruction continues to run through Luke’s account of the Passion. On the way to his crucifixion, Jesus encounters a band of women weeping for him. Their presence may be a faithful historical recollection, because women accompanied Jesus on his travels, he had women friends, Martha and Mary in the vicinity of Jerusalem, and women who had followed him from Galilee followed him to the cross and sought to complete his burial.12

But in this encounter the “daughters of Jerusalem” becomes a collective symbol for Jerusalem as surrogate targets of the prophetic wrath for the city that murders its prophets.13 Jesus’ dire judgment is, moreover, a transgenerational threat extending to their children, who would have witnessed the destruction of the city by Titus. Around the foot of the cross, too, the women from Galilee, including his mother Mary and Mary Magdalene, kept watch as he died. The faithful Galilean women will also venture out in the early morning darkness to complete Jesus’ burial rites. Lamentation fills Jesus’ last days in Jerusalem. The women are wailing for Jerusalem as well as for him.

Again and again, Jerusalem has been the occasion for tears. The Book of Lamentations, especially chapters 1 and 2, consists of laments for Jerusalem in the wake of the destruction of the city by the Babylonians in 597.

Oh, how God in his wrath
Has brought darkness on the daughter of Zion!

He has flung the glory of Israel

from heaven to the ground,

No more remembering his footstool

on the day of his wrath.

The Lord has pitilessly destroyed

all the homes of Jacob;

in his displeasure he has shattered
the strongholds of the daughter of Judah;

he has thrown to the ground, he has left accursed

the kingdom and it rulers. (Lamentations 2:1-2)

Lamentations turns the loss repeatedly in a hundred different ways, bringing it before God in prayer, only briefly hinting at the end of Book 5 at repentance and forgiveness.

But you, O God, remain forever;

Your throne endures from age to age.

You cannot mean to forget us forever?

You cannot mean to abandon us for good?

Make us come back to you, O Lord, and we shall come back.

Lamentation only lasts so long before there is a change of heart, and the desire arises to renew the relationship with God. In recent years theologian Bradford Hinze has proposed that the Church needs to take up lamentation as a form of religious expression for our own disappointments today.14 Hinze was writing about the disappointments of Vatican II Catholics during the papacy of Benedict XVI. In comparison, the grief of Palestinians, and particularly Palestinian Christians, over the fate of Jerusalem must be so much more acute, beginning with Al-Nakba, the expulsion of hundreds of thousands of Palestinians during the War of Israeli Independence, seventy year ago and rising to a crescendo after the collapse of the Oslo Accords in the years following the Second or Al-Aqsa Intifada in 2000.

The Kairos Palestine Movement and the Spirit of Lament

The “Kairos Palestine,” a statement by Palestinian Christian leaders, in 2009 was a lament of sorts for it catalogued the ills suffered by the Palestinian people as a result of the “Israeli occupation of Palestinian territories, deprivation of our freedom and all that results from this situation.”15 The injustices it described included: the separation wall, the expansion of Jewish settlements, the humiliations inflicted at checkpoints, deprivation of religious liberty and access to the holy places, the extended expulsion of refugees, prisoners indefinitely deprived of freedom, and an array of offenses committed to deny Palestinian Jerusalemites of their presence in the city. To this the Kairos document adds discrimination against Israeli Arabs, the loss of population through emigration, and collective punishment for acts of resistance.16

“Kairos Palestine” was a cry from the heart of the Palestinian Church, released under the patronage of the Heads of Churches in Jerusalem. It was also an appeal to the universal church for solidarity and repentance (by Christian Zionists) and to the wider world for increased support, especially for the Boycott, Divestment and Sanctions (BDS) initiative “in order to reach a just and definitive peace that will put an end to Israeli occupation of Palestinian and other Arab territories and will guarantee security and peace for all.”19 Unfortunately, it was the appeal for BDS, against which the defenders of Israel launched charges of anti-Semitism that made the appeal controversial in U.S. church circles and kept it from receiving wider support.20 Nonetheless, Kairos Palestine is a modern expression of lament that voices distress over the prolonged and intensifying suffering of the Palestinian people, including Palestinian Christians in Jerusalem who face mounting pressure on their continued presence in the holy city.21

Lament brings life to the repeated pleas for justice that go unheeded by political authorities. As Msgr. Simon Kassas, speaking for the Holy See, commented at the UN Security Council on July 25, 2017, these statements “already sound like broken records. These broken records will play on,” he added, “unless a viable solution to the Palestinian Question is found.”22 Prayerful lament allows our grief over the repeated sufferings of our brothers and sisters in Jerusalem to take on flesh in our hearts and cling to our being rather than shrink to hollow echoes in the recesses of memory.

In prayer, too, we place our hurts, our disappointments, our disillusionments and frustrations before God who is the fulfillment of all our hopes, our desires, and our unrealized dreams. When we address our lamentation to God in prayer, we come to an end of grieving, find a place for repentance over the part we have played in our distress, and unveil a hope beyond hope for the lasting good of Jerusalem and all the Holy Land.23

Just as Lamentations and the Prayer of Tobit conclude with hope in God, so Kairos Palestine reflects on hope. “Despite the lack of even a glimmer of positive expectation, our hope remains strong,” write the authors. “The present situation does not promise any quick solution or the end of the occupation that is imposed on us…. Despite this, our hope remains strong,” they continue, “because it is from God. God alone is good, almighty and loving and His goodness will one day be victorious over the evil in which we find ourselves.” In that hope, Christians are enabled to resist injustice as they work for peace and reconciliation.24 The hope of Christians is consistent with the experience of continued suffering in Jerusalem and Palestine more broadly. It is a hope born in a crucible of suffering and loss.

**Jesuit Father Drew Christiansen, S.J. is the Distinguished Professor of Ethics and Global Human Development at Georgetown University and a Senior Research Fellow at the Berkley Center for Religion, Peace and World Affairs. He is a Canon of the Holy Sepulcher of Jerusalem and a co-founder the Holy Land Christian Ecumenical Foundation and a member of its Advisory Board.