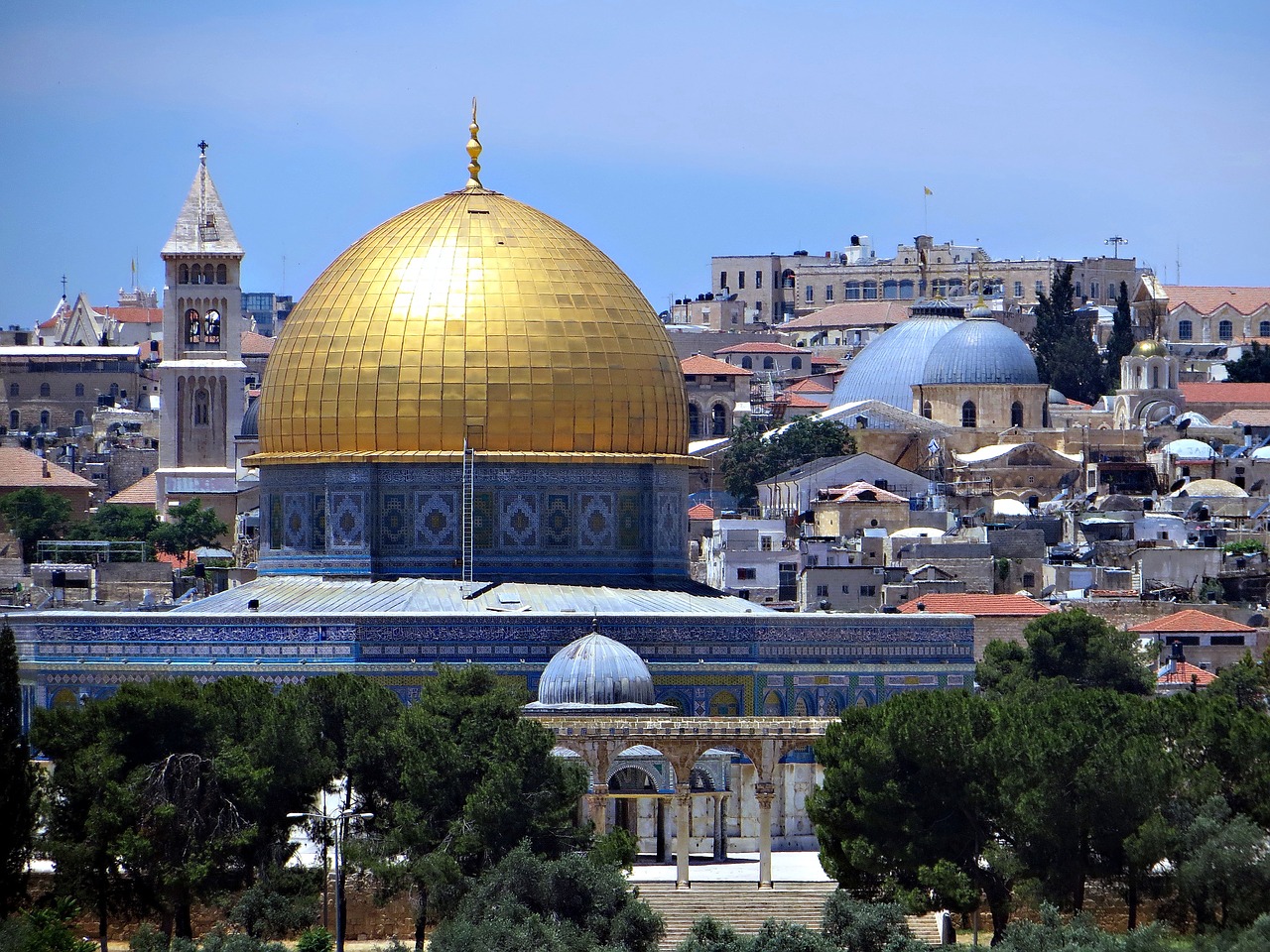 What the Al-Aqsa mosque compound means to Palestinians

In the news, the al-Aqsa mosque compound is a fuse for conflict between Israel and Palestinians. But in daily life of Muslims, it’s a park, holy site and, yes, a symbol of resistance.

Now a look at the routines of ordinary life for Palestinians in an extraordinary place – the al-Aqsa Mosque complex. Jews revere it as the site of an ancient temple destroyed 2,000 years ago. For Muslims, it’s where Muhammad ascended to heaven from a spot marked by the centuries-old Dome of the Rock. Day to day, it’s where Palestinians go for relaxation, daily worship and to take a stand. But any rise in tensions there can fuel conflict between Palestinians and Israel. NPR’s Fatma Tanis starts her report at the entrance.

FATMA TANIS, BYLINE: To get to al-Aqsa, first I have to pass through an Israeli police checkpoint and answer some questions in Arabic.

After searching my bag, inspecting my U.S. passport, a little test, the officer asks me if I’m Muslim. Non-Muslims can only enter during a few hours each day.

Not quite satisfied, he asks me to recite the first several lines of the Quran by memory, listening to every word.

Once I’m allowed through, my eye is immediately drawn to the Dome of the Rock at the center of the site, with its iconic golden dome. But that’s just one part of the sprawling campus of lawns and trees, gazebos and fountains. There are even libraries and an art museum. It’s not prayer time, and it feels strikingly serene. People are sitting and relaxing. Kids are kicking around a ball. It’s a scene you’d see at any park anywhere in the world.

TANIS: I spot two young women sitting under an olive tree facing the Dome of the Rock, snacking on sunflower seeds. They’re best friends Lama Nasser and Raghad Taha. They like to come here because they enjoy the vibe.

TANIS: “I feel relaxed and at peace when I’m at al-Aqsa,” says Nasser. Taha chimes in next.

RAGHAD TAHA: (Through interpreter) Since childhood, we would come here to play and grew up with a connection to this place.

TANIS: And they feel fortunate this is their local mosque. Here’s Nasser again.

NASSER: (Through interpreter) It’s different here. There’s a greater sense of spirituality and sacredness. It’s like no other mosque.

TANIS: To understand more about who comes here and why, I visit Yusuf al-Natsheh at his office here.

He’s the director of tourism and architecture for the religious foundation that runs the complex.

AL-NATSHEH: For a lady, this is a site where she can really perform a sort of retreat and picnics. For an old man, this is a place where he can really seek refuge and speak with God. For a kid, maybe it’s the playground for him.

TANIS: He says it’s also one of few remaining spaces in Jerusalem for Palestinians to hang out as Israeli police crackdown on gatherings in their neighborhoods. Plus, there is the architectural appeal.

TANIS: He’s talking about the contrast between the two key buildings – the ornate Dome of the Rock, built around 1,300 years ago with its shining gold dome and colorful tiles, and the simpler but bigger al-Aqsa Mosque itself, with the small gray dome.

AL-NATSHEH: And that, for me, is perfectness.

TANIS: But it’s more than a park or architecture. It’s revered around the world as religious ground. Muslims believe their prophet Muhammad prayed where the mosque is now and then ascended to heaven on a night journey from the rock under the golden dome.

MUSTAFA ABU SWAY: Al-Aqsa Mosque is at the center of everything, and…

TANIS: Another person I meet here is Mustafa Abu Sway. He’s a professor of Islamic studies at Jerusalem’s al-Quds University.

ABU SWAY: People who know the larger picture, they know that it’s not about Palestinians. It’s not about the Arabs. It’s about the Muslim world. This space belongs to the 2 billion Muslims that exist today, and this is still their mosque.

TANIS: Muslims worldwide were offended this spring by images of Israeli police charging into the mosque and firing tear gas and rubber bullets. They were chasing protesters who were throwing stones.

TANIS: And remember when I said non-Muslims can come here at certain hours. Tourists visit and so do ultra-nationalist Jews, who come in flanked by Israeli police because while this is the Noble Sanctuary to Muslims, it’s the Temple Mount to Jews, who also have deep connections to the site. It’s where the temple stood 2,000 years ago. The Western Wall is a remnant of that time, supporting part of the plateau. And Jews pray at its base.

But the Israeli rabbinate tells Jews to avoid the hilltop because it’s too holy. And Israel prohibits Jewish prayer here to keep the peace. Israeli views about the site divide along the country’s secular-religious lines, according to Israeli writer Pinhas Inbari, who uses Tel Aviv and Jerusalem as shorthand for the split.

PINHAS INBARI: As far as Tel Aviv is concerned, they don’t care at all. They even don’t care about Jerusalem, not al-Aqsa. Abroad, the Jerusalemites, OK, they think that, yes, al-Aqsa is ours. It belongs to our heritage, not Islam, et cetera, et cetera.

TANIS: He says those actually pressing for a change are small radical groups, but those groups have political backing and talk about building a new temple where the Dome of the Rock is. Palestinians see them praying on the compound more openly now in bigger numbers and worry they’ll take over. That’s another reason Palestinians make it a point to be there.

TANIS: On Fridays, Muslims stream into al-Aqsa by the thousands. It’s their holiest day of the week, and there’s a festive feel in the air. Families are all dressed up, like Bilal al Hur and his two little daughters, who came here from the West Bank city of Hebron. They’re all wearing cowboy hats; the girls in pink and their father in brown. As the Quran is read over the loudspeakers, he tells me they come here every week to pray.

BILAL AL HUR: (Through interpreter) Al-Aqsa is a dream, and you’ll find there’s a soul connection between any Palestinian child and this mosque.

TANIS: But there is an added intensity because Friday is when al-Aqsa becomes not just a green space or religious ground but also a place where Palestinians are taking a stand. A reminder comes from the imam through the loudspeakers as he prays.

UNIDENTIFIED IMAM: (Through interpreter) By your will, this is our mosque. And by your will, we will stay here.

TANIS: What follows is a sermon on more routine matters – family relations.

TANIS: But just coming here is an assertion of Palestinian rights for many, an act of resistance to the Israeli occupation of East Jerusalem, the West Bank and Gaza. And it’s a defense of the mosque itself. Yusuf al-Natsheh says it’s an especially strong sentiment among young people.

TANIS: As the Friday prayer wraps, many girls and boys are among the crowds exiting the mosque. One of them is a 15-year-old boy, and we’re not using his name because he’s a minor. He says he used to come here with his uncle as a toddler, and now he comes by himself every two days.

TANIS: “I consider al-Aqsa my home,” he says. He’s afraid that one day it will be taken away and says he’s willing to protect it with his life if he has to.

(SOUNDBITE OF MARY LATTIMORE’S “THE QUIET AT NIGHT”)