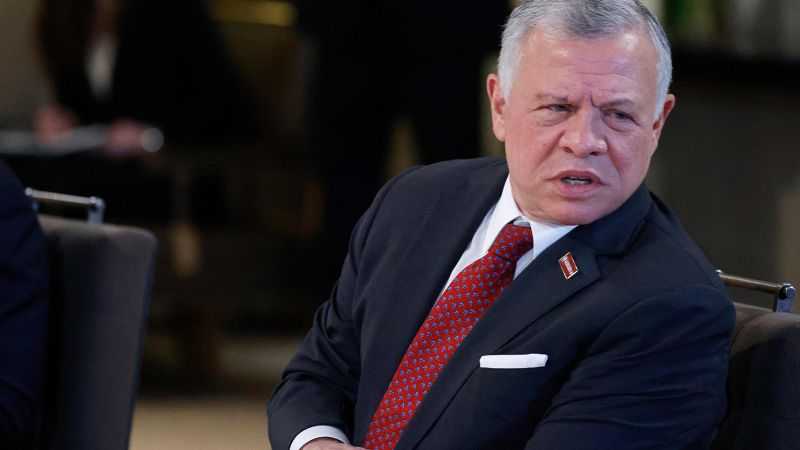 Amman, Jordan –  Jordan’s king says he is prepared for conflict should the status of Jerusalem’s holy sites change as Israel prepares to swear in what is likely to be the most right-wing government in its history.

King Abdullah II told CNN’s Becky Anderson in an exclusive interview this month that there is “concern” in his country about those in Israel trying to push for changes to his custodianship of the Muslim and Christian holy sites in Israeli-occupied East Jerusalem, warning that he has “red lines.”

“If people want to get into a conflict with us, we’re quite prepared,” he said. “I always like to believe that, let’s look at the glass half full, but we have certain red lines… And if people want to push those red lines, then we will deal with that.”

Israeli leader Benjamin Netanyahu’s incoming government is expected to be the most right-wing in Israel’s history and it includes controversial figures who were once considered to be on the extreme fringe of Israeli politics. This has caused concerns about the potential for an escalation in Israeli-Palestinian violence and for the future of Israel’s relations with its Arab neighbors and Western allies.

This year was already the deadliest for Palestinians and Israelis in nearly two decades, raising the specter of a new Palestinian uprising against Israel.

“We have to be concerned about a next intifada (uprising),” said the king. “And if that happens, that’s a complete breakdown of law and order and one that neither the Israelis nor the Palestinians will benefit from. I think there is a lot of concern from all of us in the region, including those in Israel that are on our side on this issue, to make sure that doesn’t happen.”

Israel captured East Jerusalem from Jordan in the 1967 war but signed a peace treaty with it in 1994 under which it formally recognized Amman’s special role at the city’s holy sites. But the two have since had an uneasy relationship, with Jordan regularly accusing Israel of violating the agreement that gave it control of the sites and barred non-Muslims from praying there.

Jordan’s Hashemite monarchy has been the custodian of Jerusalem’s holy sites since 1924 and sees itself as the guarantor of the religious rights of Muslims and Christians in the city.

Tensions are highest over the compound known to Muslims as the Haram Al Sharif, which is called the Temple Mount by Jews. The site includes the Al Aqsa Mosque, the third holiest site in Islam. The area is also the holiest site in Judaism. Politicians on the Israeli right often argue that Jews should also have a right to pray there.

One of the most controversial figures in Israel’s incoming government is Itamar Ben Gvir, who is set to become the national security minister and assume control over the police, including law enforcement at Jerusalem’s holy sites. Ben Gvir has a long history of inciting violence against Palestinians and Arabs. He has been convicted of inciting anti-Arab racism and supporting terrorism and has openly called for changing the status quo at the holy sites.

“I don’t think those individuals are under just a Jordanian microscope. They’re under an international microscope,” the king said, responding to a question about Ben Gvir’s views. “I have to believe that there’s a lot of people in Israel also that are concerned as much as we are.”

He refused to say how Jordan would respond to changes in the status of the holy sites. “At the end of the day, the Israeli people have the right to pick whoever they want to lead them… We will work with anybody and everybody as long as we can bring people together,” he said.

Of Jordan’s population of around 10 million, more than half is of Palestinian descent, including more than two million Palestinian refugees.

Jordan was the second Arab nation to normalize relations with Israel, after Egypt. But after a decades-long wait, Israel scored a major diplomatic victory in 2020 by gaining recognition from four more Arab states, the United Arab Emirates, Bahrain, Morocco and Sudan.

The nation’s relationship with Israel is heavily scrutinized at home, with many opposing further strengthening of ties due to Israel’s treatment of the Palestinians.

Israel’s integration into the region is “extremely important” but it is “not going to happen unless there’s a future for the Palestinians,” the king said, pointing to the overwhelming support shown by Arab football fans for Palestinians at the Qatar FIFA World Cup.

The king has redoubled efforts to shed light on the status of Christians in the Middle East of late. In September, he proclaimed at the United Nations General Assembly in New York that Christianity in Jerusalem was “under fire,” a message the patriarchs and Heads of the Churches in Jerusalem endorsed.

Some churches in the Holy Land have also been sounding the alarm about the status of Christians there. In a Christmas message this week, the Heads of Churches in Jerusalem, a grouping of Palestinian churches, issued a statement decrying the “assault” on their exercise of religion and “unwarranted restrictions” on worship. In July, the Higher Presidential Committee of Church Affairs in Palestine issued a statement condemning an attack by “extremist Israeli settlers” on the Church of the Holy Spirit and the Greek Garden, accusing the Israeli government of complicity through “inaction” in holding the perpetrators to account.

Israeli foreign ministry spokesman Lior Haiat told CNN the Heads of Churches “have full access to every governmental authority for concerns they have,” adding that acts of violence “on any community are condemned by the government and investigated with the utmost seriousness by Israeli police.”

“The State of Israel remains committed to safeguarding freedom of religion and worship for all, including the Christian community, in Jerusalem and other holy sites,” he said.

King Abdullah told CNN that churches in Jerusalem face challenges from “policies on the ground,” causing the Christian community to come under pressure.

“This is not a national policy, but there are those that join governments that have very extremist views towards Muslims and Christians, as there are on the other side obviously, and we have to unify against that,” he said.

Jordan has become a safe haven for Middle Eastern Christians for the better part of the past two decades as neighboring countries have been embroiled in conflicts that have pushed some of the oldest Christian communities in the world to flee their homelands.

In December, the monarch launched a master plan to develop Bethany Beyond the Jordan, a UNESCO World Heritage Site where Christians believe Jesus was baptized. The plan aims to build lodging, museums and amphitheatres catering to as many as 1.5 million tourists per year.

“I think one of the things that people misunderstand about this place is how inclusive it is. Almost 15% of the visitors that come here are Muslim,” he told CNN. “So this is an opportunity to break down those barriers and to show how proud we are of not only our historical Christian heritage here in Jordan, but the relationship between Christianity and Islam.”

People in the Middle East “just want to move on with their lives,” said the monarch. “So, as challenging as 2022 was, and as difficult as the dangers of 2023 are, there’s an opportunity for us to move beyond.”

That can be done through regional integration, he said.

“I’ve gotten away from the feeling that politics are going to solve our problems. It’s economic dependency,” he said. “When I am invested in your success because your success is my success, at the end of the day means we can move forward.”