Home / JPI News / JERUSALEM IS FOR ALL 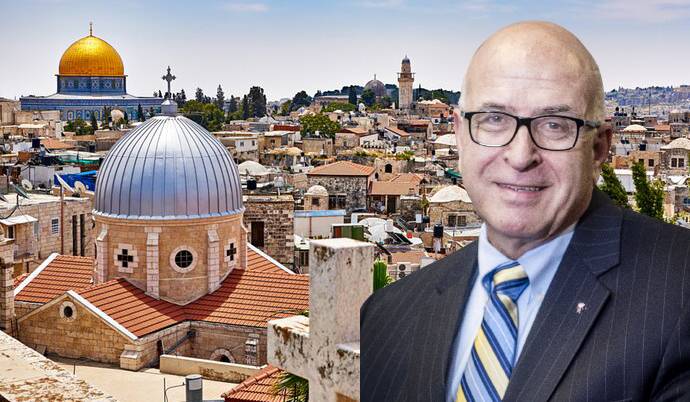 JERUSALEM IS FOR ALL

**Sir Rateb Y. Rabie, KCHS is the Founder and President/CEO of the Holy Land Christian Ecumenical Foundation (HCEF), Founder and President of the Know Thy Heritage (KTH) Leadership Initiative, and co-Founder of the Jerusalem Peace Institute and Chair of its Board of Directors. Born in Amman, Jordan to Palestinian parents, he is co-founder and past national president of the Birzeit Society and co-founder, Vice President, and Treasurer of the Institute for Health, Development, and Research in Palestine. He is also a Knight Commander of the Equestrian Order of Holy Sepulchre and a 4th Degree Knight of Columbus, founder and co-chair of the Holy Land Outreach Committee of the Knights of Columbus, Maryland State Council. He is recipient of the Faith and Tolerance Award from the Arab American Anti-Discrimination Committee. Sir Rateb is committed to improving the living conditions for Palestinians Christians in their homeland, preserving Palestine’s Christian heritage, and strengthening the identity of Palestinian Christians in the worldwide diaspora.

All Christians trace their roots to the first Pentecost (Acts 2:11). The Church was born when the Holy Spirit, in the form of tongues of fire, descended upon a group of Jesus’ disciples in an upper room in Jerusalem over 2,000 years ago. Today, the Christian families living there are neither immigrants nor converts from Judaism or Islam. They are the descendants of those who first believed in Jesus Christ. Lest we forget, Jesus, born in Bethlehem and raised in Nazareth and other parts of the Holy Land, is the only prophet who spent months, if not years, in Jerusalem and its environs. It is there where he was judged, crucified, and resurrected.

These Christians live in Jerusalem, Bethlehem, Nazareth, Zababde, Ibillin, Shefa-‘Amr, Taybeh, Jifna, Ramallah/El Bireh, Birzeit, Madaba, Karak, and other towns and cities in Palestine, Jordan, and Israel. Together, they comprise the Mother Church. While cognizant of the Holy City’s importance for Muslims and Jews, they view it as an integral part of their faith.

U.S. President Donald J. Trump’s recognition of Jerusalem as the political capital of the State of Israel betrays centuries-old international commitments to a shared city. His decision does not only threaten Palestinian access to the city, but also disrupt the very character of Jerusalem itself. Through his words and actions, he is adding himself to the long list of politicians and others who seek to lay claim to Jerusalem for their personal gain and private interests, disregarding the history, the laws, and the complexity of the facts on the ground.

How can it be that after 2000 years of faithful and shared custody over their Holy City, Palestinians – Christian and Muslim – should lose their right to their spiritual and geographical home overnight? It is incomprehensible to consider Jerusalem under the sole jurisdiction of any one faith or political entity.

To dedicate Jerusalem to Israel under the false pretenses of upholding a U.S.-led peace process undermines our better judgment. As Palestinian American academic, political activist, and literary critic Edward W. Said, who was born in Jerusalem, argued in an essay on Jerusalem several years ago, a strong campaign that recognizes Jerusalem as a complex and multivalence city is precisely the kind of antidote we need to the “drifting, impossibly unwise course now being undertaken … beneath the tattered banners of the peace process. I do not see that overly praised and defended process as leading to the kind of peace most people can live with for any length of time ….”[i]

The Holy City is special, and its character resides in its inclusivity and universality. It should be shared by two peoples, Palestinian and Israeli, and the three monotheistic faiths of Christianity, Islam, and Judaism. As Pope Francis has cautioned, “Jerusalem is a unique city sacred to Jews, Christians, and Muslims, where the Holy Places for the respective religions are venerated, and [where there is] a special vocation to peace … such identity must be preserved and strengthened for the benefit of the Holy Land, the Middle East, and the entire world.

On July 17, 2000, the Greek Orthodox Patriarch, the Latin Patriarch, and the Armenian Patriarch in Jerusalem sent a letter to U.S. President Bill Clinton, Israeli Prime Minister Ehud Barak, and Palestinian National Authority President Yasser Arafat who were meeting in Camp David to negotiate several issues, including Jerusalem. In it, they offered prayers so that the three political leaders will succeed “in [their] prophetic mission of ending the long and painful conflict in our region.” Equally important, their letter provided a concise explanation of the Christian reality in the Holy Land (Appendix III).

[I]t is an established fact that our Patriarchates and Churches enjoy a long history and a rich heritage in this biblical land. Local Christians have been represented by their ecclesial institutions here for centuries, and have enjoyed special privileges that were codified by the Status Quo provisions as much as by custom and tradition over many centuries. As you deliberate over those issues that impact the Holy City of Jerusalem, we trust you will not forget or overlook our age-long presence here. The rich tapestry of this land is made even richer and more precious with this continuous Christian life, witness, and presence alongside the two other Abrahamic traditions of Judaism and Islam.

On December 6, 2017, the Patriarchs and Heads of Churches in Jerusalem sent a letter to President Trump urging him to consider their viewpoint and “continue recognizing the present international status of Jerusalem.” They asked him to help them “all walk towards more love and a definitive peace, which cannot be reached without Jerusalem being for all” (Appendix V) A December 10 Vatican Press Office communiqué reiterated the Holy See’s position on “the singular character of the Holy City and the essential need for respecting the status quo,” as well as the conviction that “only a negotiated solution between Israelis and Palestinians can bring a stable and lasting peace.

If there is to be peace in Jerusalem and the rest of the Holy Land (Israel and Palestine), then the fate of Jerusalem has to be decided through negotiations that recognize both secular and religious positions on and interests in the city. Jerusalem is a central part of the present and future of both Palestinian and Israeli societies, and of Jews, Christians, and Muslims. Lasting peace can only be achieved by securing the political aspirations of both peoples and the religious rights of the three faiths. There can be no monopoly of sovereignty by either Israelis or Palestinians. Jerusalem should remain shared.

As Patriarch Emeritus of Jerusalem Michel Sabbah stated, “True political leaders and church leaders, local and universal, should consider Jerusalem, first, as a universal city, and then look at the local exigencies of its two peoples” (Essay 1).

The fate of Jerusalem cannot and should not be decided by any single political leader or foreign government. Christians and all peace-loving people around the world should raise their voices against any move that would hand over Jerusalem, whether symbolically or effectively, to any one single faith or political entity.

This is a historic moment on which the future hinges. Jerusalem is in danger. We must stand against would-be conquerors of our Holy City and say: “Keep your hands off of Jerusalem.” We must stand in solidarity with its Palestinian and other inhabitants and say: “We share your anguish and we will never abandon you.”

To buy the books:

What Jerusalem Means to Us: Christian Perspectives and Reflections.

What Jerusalem Means to Us: Muslim Perspectives and Reflections.