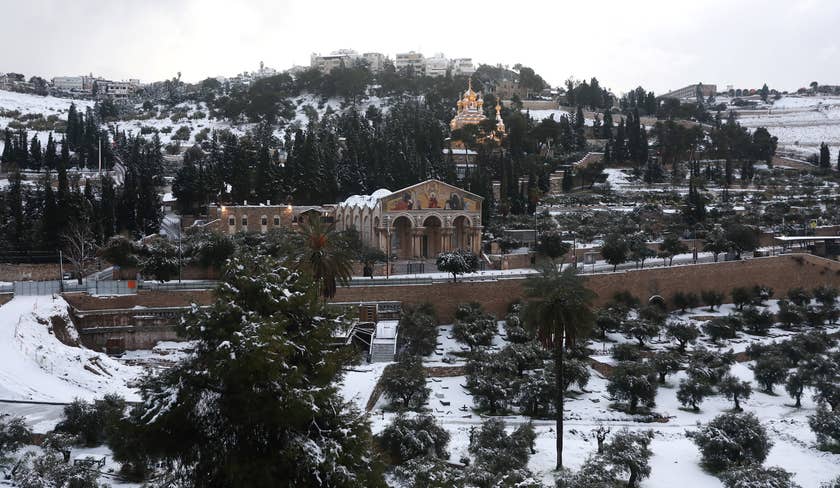 Israeli Authority Backs Down From Jerusalem Park Plan After Outcry From Major Churches.

Representatives of the three largest churches in Jerusalem warned the plan was an attempt to ‘minimize, not to say eliminate, any non-Jewish characteristics of the Holy City’.

Israel’s Nature and Parks Authority said on Monday that it was backing down from an expansion plan to encompass Christian holy sites on Jerusalem’s Mount of Olives in a national park, following outcry from major churches.

The plan called for expanding the Jerusalem Walls National Park to include property owned by several churches in the city. The heads of the major denominations believed the scheme would infringe on their rights at the sites.

‘The New KKK’: the danger of Israeli settler violence against Palestinians. LISTEN

Currently, the national park, which was created after the Six-Day War, in 1968, extends over large areas including the Palestinian village of Silwan, the Hinnom Valley and land abutting the Old City’s walls. The main part of the park, in the area of the City of David-Silwan, is controlled by the right-wing City of David Foundation, aka Elad, which in recent years has been expanding its control over additional swaths of land.

Today the park covers 1,085 dunams (approximately 271 acres). The nixed parks authority plan, initiated about a year ago, called for the park to be expanded by another 275 dunams, mostly on the slopes of the Mount of Olives – in proximity to several of Christianity’s holiest churches and sites. Christians believe that several important events in the life of Jesus took place on the mount.

The explanatory remarks on the plan state that the goal is to ensure the public nature of the area by maintaining its historic, religious and national significance, as well as its landscape and architecture.

However, in recent weeks, the scheme sparked the ire of Christian communities and leaders in Jerusalem, who were concerned over possible damage to these religious sites and the status quo. Because the area is considered a national park, expropriation of church property is in prohibited in principle – though the plan would have severely limited the church from future development in the area.

This concern led representatives of the three largest churches in Jerusalem – the Greek Orthodox Patriarch Theophilos III, the Catholic Custos Francesco Patton and the Armenian Patriarch Nurhan Manougian – to dispatch an unusual letter to Minister Tamar Zandberg on Friday with a request to stop the plan.

Although their letter did not specifically state this, it seems that the church leaders were also concerned about Elad’s burgeoning control over large parts of the national park.

“In recent years,” they wrote to Zandberg, “we cannot help but feel that various entities are seeing to minimize, not to say eliminate, any non-Jewish characteristics of the Holy City by attempting to alter the status quo on this holy mountain. They have failed due to the objection and lack of cooperation from the Churches. After their attempts failed, they resorted to statutory powers by advancing a plan to declare vast parts of the mountain as a national park.”

Although the expansion plan was officially presented by the INPA, the religious leaders added, “it seems that is was put forward and is being orchestrated, advanced and promoted by entities whose apparent sole purpose is to confiscate and nationalize one of the holiest sites to Christianity and alter its nature.”

“This is a brutal measure that constitutes a direct and premeditated attack on the Christians in the Holy Land, on the churches and on their ancient, internationally guaranteed rights in the Holy City. Under the guise of protecting green spaces, the plan appears to serve an ideological agenda that denies the status and rights of Christians in Jerusalem.”

Initially, the parks authority provided this response: “We are in a dialogue with all entities in advance of the meeting [of the planning committee next month]. The area on the slope of the Mount of Olives, according to all plans beginning with the British era, is earmarked for conservation; this is not an area for construction. All the plan does is strengthen the conservation status of the area.”

“This is one of the most important heritage landscapes in the world. All the areas described here are slated for conservation, according to all valid plans – open public spaces, demarcated by the [new] plan to be part of the national park. Today, as well, there are no construction rights accruing to the area under discussion. We will not harm the churches.”

But shortly after, the Nature and Parks Authority said it was freezing the plan, which was to be approved on March 2 by Jerusalem’s planning committee.

The authority said it has “no intention of advancing the plan in the planning committee, and it is not ready for discussion without coordination and communication with all relevant officials, including the churches, in the area.”

Israeli rights groups and peace activists had also denounced the plan as an attempt by to marginalize Palestinian residents and increase the Jewish religious and national significance of the Mount of Olives.