Delinda Curtiss Hanley is news editor and executive director of the Washington Report on Middle East Affairs (WRMEA). She spent most of her childhood in the Middle East accompanying her foreign service officer father Richard Curtiss, co-founder of the Washington Report on Middle East Affairs. After attending the American University in Washington, DC, and American University of Beirut, she earned a degree in education from the University of Maryland. She joined the Peace Corps and taught English in the Sultanate of Oman. She stayed for three additional years to work in the Musandam Province of Oman as a consultant for a development project. After several years of teaching in Saudi Arabia and the United Kingdom, she returned the United States in 1988 to work as an editor and picture researcher for a publisher of historical magazines. In 1996, she began working at WRMEA. She writes extensively for the magazine on an array of topics and her stories have also been published in the Arab News, Saudi ARAMCO World, The Minaret, Islamic Horizons and other U.S. magazines, including The Jewish Spectator. She has written extensively on Palestine, Tunisia, Saudi Arabia, Libya, the emergence of the Muslim voice in Arab politics, and fairness in the mainstream American media. Ms. Hanley has given talks at various conferences and demonstrations across the United States and Canada. 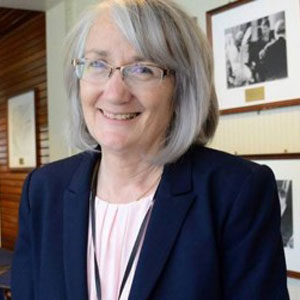