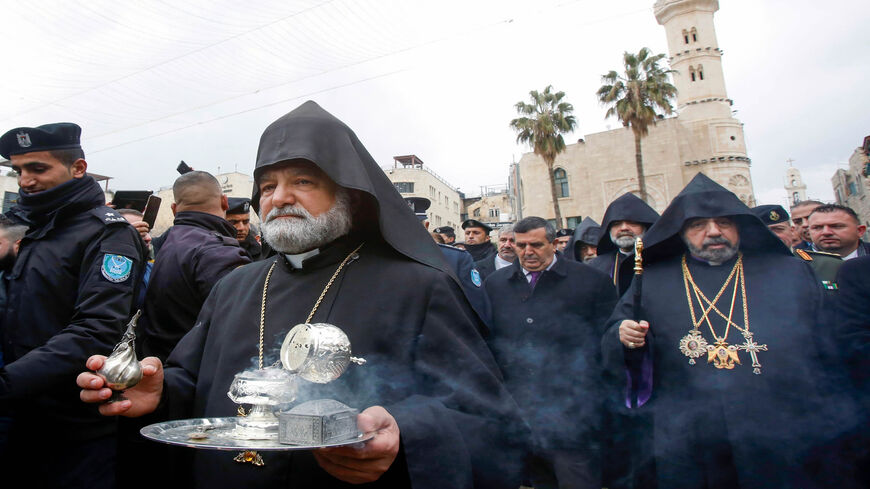 Aside from the Orthodox, the Armenians are the oldest Christian community in Palestine. The nearly 1,000 Armenians live in the Armenian Quarter, which is located next to the Jewish Quarter, in the Old City of Jerusalem, where housing, school and other basic institutions are provided for the local community. The current religious leader of the Armenians and his real estate director are now embroiled in a row with the Palestinian leadership for leasing hitherto unused sensitive land next to the Jewish Quarter initially to the Israeli municipality for a parking lot.

The 10-year lease that required the Israelis to spend $2 million to clear rubble in order to prepare the parking lot is now said to have become a 99-year lease to Jewish Australian businessman Danny Rubenstein, to convert it into a luxurious hotel that the patriarchate has admitted to and said it “will bring in a stream of hundreds of thousands of dollars that will provide financial stability for the cash-strapped church.”

Palestinian officials who contacted the patriarchate twice, to no avail, have now appealed to Armenia. On Sept. 22, a letter was sent by Ramzi Khoury, head of the Palestinian Higher Presidential Committee for Churches Affairs in Palestine, to Catholicos of All Armenians Patriarch Karekin II calling land transactions in the Armenian Quarter in the Old City of Jerusalem a violation of international law, since the area inside the Old City is an “integral part of the Palestinian occupied territories” governed by relevant international resolutions.

The Armenian Foreign Ministry has also been “urged to intervene,” according to a statement by the Higher Presidential Committee.

On Sept. 23, Jordan’s Foreign Minister Ayman Safadi met with his Armenian counterpart, Ararat Mirzoyan, in New York on the sidelines of the UN General Assembly meeting and urged Armenia to intervene to “protect the properties of the Armenian Church in the Old City and to stop any action that can affect its legal and historic status,” according to a statement by the official Petra news agency.

Armenian Patriarch of Jerusalem Archbishop Sevan Gharibian and head of the real estate department Rev. Baret Yeretsian replied to the accusations and attacks by insisting that what was done would have a long-term benefit for the church.

A Sept. 22 statement issued by the chair of the Armenian Patriarchate Synod admitted that the church had indeed ratified an agreement for the long-term lease of the land plot known commonly as Cow’s Garden, stressing that this lease provides “a steady income of hundreds of thousands of dollars annually to support the Armenian patriarchate.”

The statement signed by Father Samuel Aghazian admitted that a “luxurious hotel structure” would be built based on a long-term lease “without imposing any risk to the full and exclusive ownership of this land.”

It notes that “the title of the property will be finally registered with the Land Registry (Taboo) in the name of the patriarchate.”

The church also criticized the Islamic Waqf stating, “The development and construction of the property will establish and reinforce possession of the property and protect it against repeated attempts of trespassing by individuals and Waqf, as well as against potential expropriation and confiscation by [Israeli] municipal or government authorities that typically apply to vacant properties.”

Waqf officials in Jerusalem and Amman refused to comment on the accusation and preferred to deal quietly with the Armenian Church leadership.

Sources in Jerusalem who have asked not to be identified told Al-Monitor that Armenians in Palestine are unhappy with this case, with many refusing to go along with the patriarch. More significantly, it appears that the St. James Synod, which is the highest religious body in the church, has not met in three years and has not approved all these deals. This means that in fact the Synod is most likely opposed to these land deals that will cause unnecessary and long-term friction with the Palestinians and will side with Israel in the Palestinian-Israeli dispute over the occupied Old City of Jerusalem.

Israeli relations with the Armenians have fluctuated over the years. The Israelis have tried to propose affinity with the Armenians because the two communities combine religion with nationalism. On the other hand, Armenians have accused Israel of supplying weapons to Azerbaijan, which may have tilted the latest war over Nagorno-Karabakh in favor of the largely Muslim former Soviet country.

As for Sheik Jarrah and Silwan, the most recent land conflict in the occupied city of Jerusalem reflects a growing effort by Israel to make the holy city more Jewish, while Palestinians in Jerusalem, largely isolated and politically orphaned, are trying to clutch onto international law to preserve the city and to ensure it can one day become part of an independent Palestinian state.