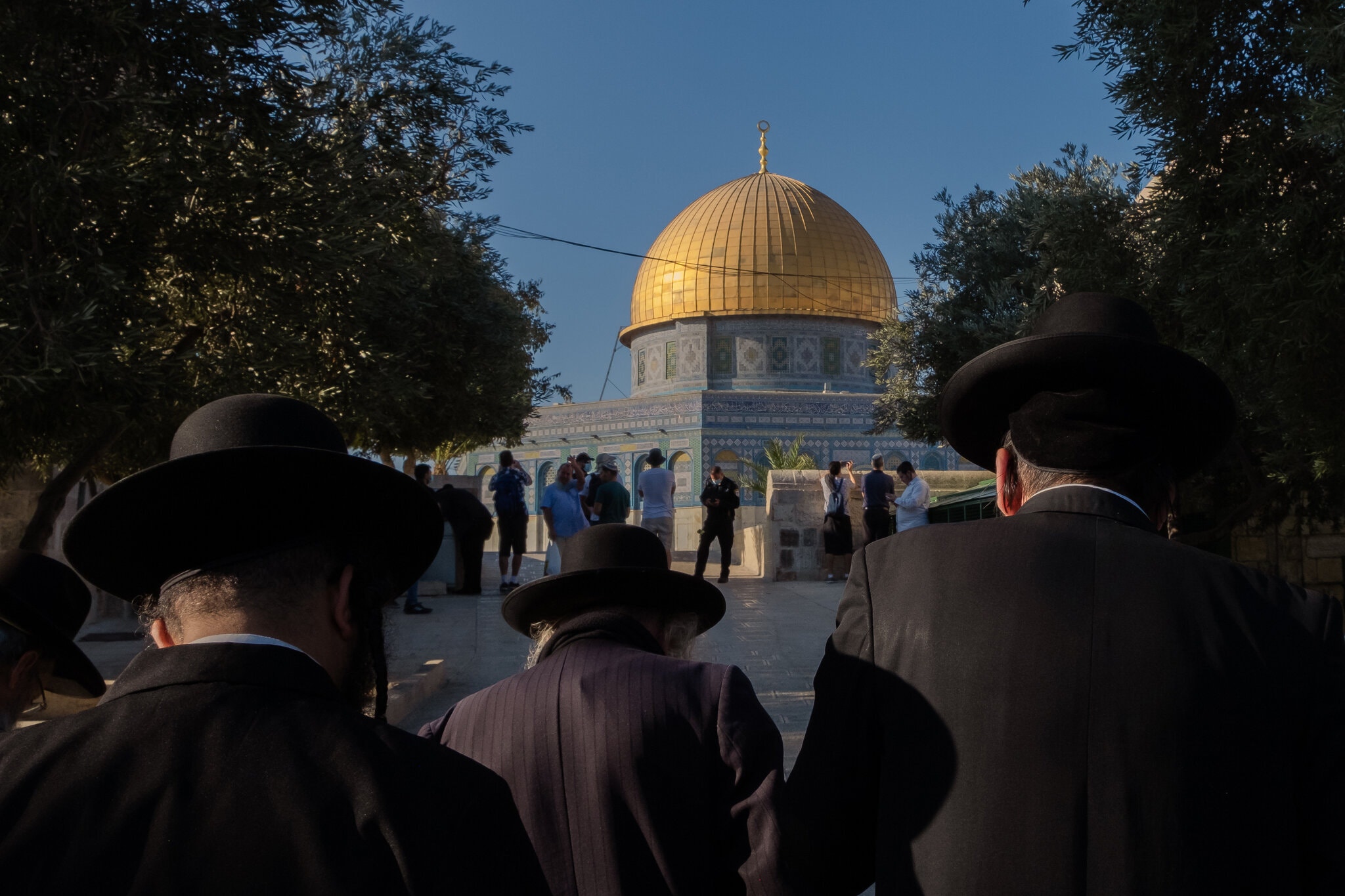 By Patrick Kingsley and Adam Rasgon

JERUSALEM — The Israeli government has long forbidden Jews to pray on the Temple Mount, a site sacred to Jews and Muslims, yet Rabbi Yehudah Glick made little effort to hide his prayers. In fact, he was livestreaming them.

“Oh Lord!” prayed Rabbi Glick, as he filmed himself on his phone on a recent morning. “Save my soul from false lips and deceitful tongues!”

Since Israel captured the Old City of Jerusalem from Jordan in 1967, it has maintained a fragile religious balance at the Temple Mount, the most divisive site in Jerusalem: Only Muslims can worship there, while Jews can pray at the Western Wall below.

But recently the government has quietly allowed increasing numbers of Jews to pray there, a shift that could aggravate the instability in East Jerusalem and potentially lead to religious conflict.

“It’s a sensitive place,” said Ehud Olmert, a former Israeli prime minister. “And sensitive places such as this, which have an enormous potential for explosion, need to be treated with care.”

Rabbi Glick, an American-born, right-wing former lawmaker, has been leading efforts to change the status quo for decades. He characterizes his effort as a matter of religious freedom: If Muslims can pray there, why not Jews?

“God is the master of all humanity,” he said. “And he wants every one of us to be here to worship, every one in his own style.”

But the prohibition of Jewish prayer on the 37-acre plateau that once held two ancient Jewish temples was part of a longstanding compromise to avoid conflict at a site that has been a frequent flash point in the Israeli-Palestinian conflict.

Under the arrangement, the Jordanian government has retained administrative oversight of the Temple Mount, known to Arabs as the Noble Sanctuary or the Aqsa compound. The Aqsa Mosque and the golden Dome of the Rock, a shrine that Muslim tradition considers to be the spot where the Prophet Muhammad ascended to heaven, are situated on its limestone plaza.

Israel has overall security authority and maintains a small police station there.

The government officially allows non-Muslims to visit the site for several hours each morning on the condition that they not pray there. Though no Israeli law explicitly bars Jewish prayer there, Jewish visitors who attempt to pray there have historically been removed or reprimanded by the police.

When this balance of power has appeared to teeter, it has often led to violence.

When Ariel Sharon, a former Israeli prime minister, toured the mount in 2000, surrounded by hundreds of police officers, the provocation led to the second Palestinian intifada, or uprising.

When Israel briefly installed metal detectors at the mount’s gates in 2017, it led to unrest that left several people dead and briefly threatened to unleash another major uprising.

And when the Israeli police raided the compound several times last spring, it contributed to tensions that led to an 11-day war with Hamas, the militant Islamist group in the Gaza Strip, as well as days of unrest within Israel.

The policy began to change during the tenure of Benjamin Netanyahu, Israel’s longest-serving prime minister, who led coalitions of right-wing and religious parties. Rabbi Glick said that the police began to allow him and his allies to pray on the mount more openly five years ago.

The numbers have quietly increased, but to avoid a backlash, the policy was not widely publicized. That changed last month, after Mr. Netanyahu was replaced by Naftali Bennett. Suddenly, Israeli news outlets published images and footage of dozens of Jews praying openly on the mount, including a lawmaker from Mr. Bennett’s party, forcing Mr. Bennett to address the issue publicly.

Mr. Bennett initially appeared to confirm a formal change in policy, saying that all religions would have “freedom of worship” on Temple Mount, to the delight of some members of his own hard-right party.

A day later, after criticism from Jordan and leftist and Arab members of his governing coalition, he backtracked, issuing a statement that the status quo ante remained in place. His office repeated that claim after a recent inquiry from The New York Times, providing a six-word comment: “No change in the status quo.”

But in reality, dozens of Jews now openly pray every day in a secluded part of the eastern flank of the site, and their Israeli police escorts no longer attempt to stop them.

On two recent mornings, Times reporters witnessed Israeli officers standing between Jewish worshipers and officials from the Waqf, the Jordanian-led body that manages the mount, preventing the latter from intervening.

To many Palestinians, the shift is provocative and unfair. They feel that Muslims have already made a big concession at the Western Wall, which is now used mostly by Jewish worshipers despite its also being important to Muslims. In 1967, Israel even razed an Arab neighborhood beside the wall to create more space for Jewish prayer.

Sheikh Omar al-Kiswani, the director of the mosque, said that the Aqsa compound should be reserved for Muslim prayer, in recognition of its importance to Muslims. Many Palestinians consider the Aqsa compound the embodiment of Palestinian identity, the animating force behind the aspiration for a Palestinian capital in East Jerusalem.

“It has been named Al Aqsa since the Prophet Muhammad rose to heaven there,” Sheikh Omar said.

The de facto change in policy is just part of a larger pattern of slights against Palestinian dignity across the occupied territories, he said.

“This is the prevalent reality, not only at the Aqsa Mosque, but also at checkpoints and other places in Palestine,” he said. “We face constant racist discrimination and infringement on our human rights.”

To many Orthodox Jews, the shift is also problematic.

The mount was once the site of two Jewish temples where tradition holds that God’s presence was revealed. Jews ascending the mount risk treading on a site too sacred for human footfall, they argue, since the temples’ exact locations are unknown. For this reason many rabbis, including the senior rabbinical authorities of the Israeli state, prohibit Jews from entry.

But to some Jews, like Rabbi Glick, there is great virtue to praying as close as possible to the location of the ruined temples.

Rabbi Glick says he is not there to provoke. But as he crossed the mount, guarded by six armed police officers, mosque officials and passers-by filmed him. The videos were soon circulated on Twitter, captioned with angry commentary.

“The extremists never used to come this far inside,” said Azzam Khatib, the deputy chairman of the Waqf council. “Now they’re taking over the whole plaza, with the protection of the police.”

Part of the resistance to allowing Jewish prayer on Temple Mount stems from the fact that some activists like Rabbi Glick want to do more than just pray there.

Ultimately, they seek to build a third Jewish temple on the site of the Dome of the Rock, the third-holiest place in Islam. Rabbi Glick says this temple would be open to all religions, and would be made possible through dialogue with Muslims.

But to Muslims, it is an offensive non-starter.

“It will lead to a religious war,” said Mr. Khatib. “But if everyone stays in their own places of worship, we’ll have peace.”

Some Jewish activists have even prepared a stone altar nearby, ready for installation on the mount as soon as it becomes politically feasible to move it there. Their group, the Temple Institute, has also worked with architects to design the floor plan of a new Jewish temple there.

While many see the group as marginal, the organization claims its ideas are gradually growing in currency.

“Twenty or 30 years ago there was no public discourse about this,” said Rabbi Yisrael Ariel, the president of the institute’s board, who as a young paratrooper helped capture the mount in 1967. “Temple Mount was forgotten.”

But the controversy over the prime minister’s recent comments about “freedom to worship” brought the issue to wider consciousness, he said.

“This was a very beneficial debate,” said Rabbi Ariel. “It’s bringing a lot more people to the Temple Mount.”