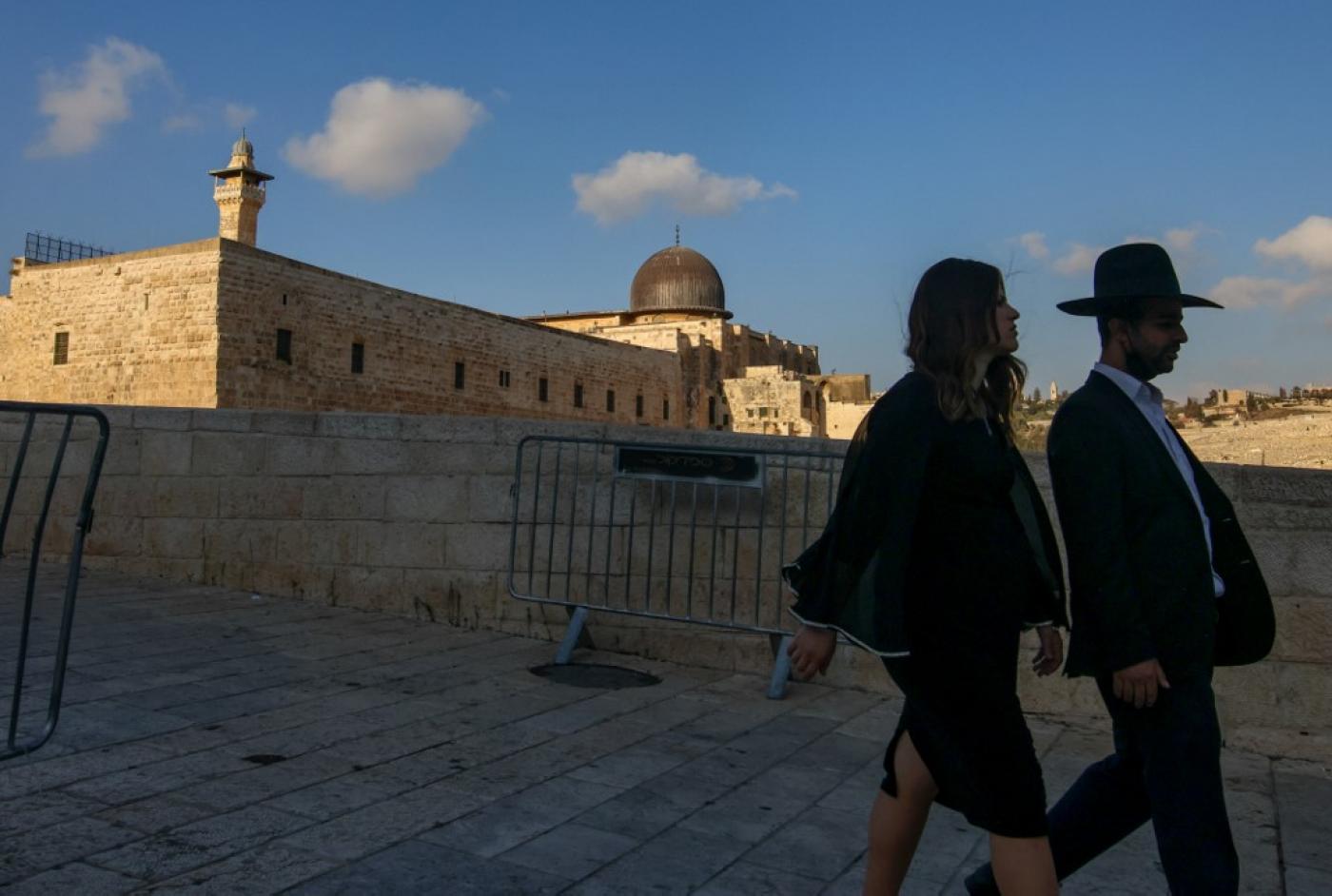 Al-Aqsa: Thousands of Israeli settlers break into mosque over one week

Thousands of Israeli settlers broke into Jerusalem’s Al-Aqsa Mosque, one of the holiest sites in Islam, during the seven-day Jewish holiday of Sukkot, which ended on Monday, in violation of a longstanding agreement between Israel and Jordan.

According to Israel’s Channel 7, a total of 3,597 settlers entered the complex, which stands in the heart of occupied East Jerusalem’s Old City. Avri Bloch, an Israeli journalist with right-wing Israeli TV station Channel 20, posted a smiling photo with his wife in front of the mosque.

Like the Blochs, many settlers were flanked by Israeli police, and sometimes accompanied by ministers, Knesset members and senior officials.

Israeli far-right activists have repeatedly pushed for an increased Jewish presence at Al-Aqsa, despite a joint guardianship agreement between Israel and Jordan.

This Tuesday, a further 151 settlers toured the site, entering through the Moroccan Gate on the western side of the complex, which Israeli authorities have controlled since their occupation of East Jerusalem, the Gaza strip and the West Bank began in 1967.

Israeli authorities barred Palestinians from entering the site during the settlers’ tour, according to Wafa. They also did a stop and search of a bus convoy carrying Palestinian citizens of Israel from Galilee and Wadi Ara to Al-Aqsa, and arrested two Palestinians at the site.

The Palestinian convoy planned to reach Al-Aqsa before dawn prayer on Tuesday and stage a sit-in protest against settlers accessing the complex.

This week, several Palestinian families called on relatives to pray at Al-Aqsa and remain there for the settlers’ incursions, which have been happening twice a day, morning and afternoon.

Settlers backed by Israeli forces regularly break into Al-Aqsa Mosque to tour the Dome of the Rock, a shrine built in the 7th century by the Umayyad caliphate on Moriah Mount, and perform prayers on the site.

Jerusalem’s Islamic Waqf, which manages the Al-Aqsa Mosque, has repeatedly described the settlers’ tours as “provocative”, and said that Palestinian worshippers and guards at Al-Aqsa feel uncomfortable with the presence of Israeli police and settlers touring the Muslim holy site.

On Monday, more than 770 Israeli settlers entered Al-Aqsa Mosque and raised an Israeli flag. On Sunday, the number hit 1,000.

An official from Jerusalem’s Islamic Waqf said that Israel has turned the site into “a military barracks” during the settlers’ tours.

Jordan, which retains custodianship over Christian and Muslim holy sites in Jerusalem, and bars non-Muslim prayer at Al-Aqsa, has repeatedly called on Israel to stop the incursions onto the site, to “respect the historical and legal status quo,” the sanctity of the mosque and the freedom of worshippers.

Settlers refer to Al-Aqsa as Temple Mount, which they believe was the site of a Jewish temple, built circa 516 BCE by Zerubbabel, the Jerusalem governor during the first Persian empire of the Achaemenids, and the site of the Second Temple, which the Roman client King Herod I built circa 70 CE.

Some right-wing Israeli activists have advocated for the destruction of the Al-Aqsa Mosque to make way for a Third Temple.

But others want to seize the eastern area of Al-Aqsa, known as al-Rahmeh Gate, to turn it into an exclusive Jewish praying site, accessed by an ancient gate in the eastern wall of the Old City.

Al-Rahmeh functions as a gate to Al-Aqsa, the Dome of the Rock and western neighbourhoods of the Old City of Jerusalem. It was shut and sealed during the Middle Ages, following wars between the Muslim and Crusader armies.

Part of al-Rahmeh Gate has been used as a Muslim prayer area, a library and home to the Islamic Heritage Committee of the Al-Aqsa Mosque.

Then, in 2003, the Israeli police closed the gate, saying that it was being used by an association linked to the Gaza-based group Hamas.

Israeli settlers have since called for turning al-Rahmeh Gate into a Jewish praying area. Instead of entering through Al-Aqsa, settlers would access the area from the outside, through al-Rahmeh cemetery.

In 2015, the Israel Nature Authority and police confiscated part of the 1,400 year-old al-Rahmeh cemetery, surrounded it with barbed wire and rebranded it a “national park” for Israeli Jews.

In February 2019, Palestinians broke the Israeli locks on al-Rahmeh Gate and resumed prayers in the area.

Despite an Israeli court decision to close al-Rahmeh Gate in July 2020, Palestinians have kept returning to pray in the area.

Palestinian Muslims and Christians do not seek to pray in the Western Wall Plaza, the holiest site in Judaism, to the east of Al-Aqsa Mosque. Their access to the site, however, is dependent on strict security checks.

Israel annexed the entire city of Jerusalem in 1980, in a move unrecognised by the vast majority of the international community.